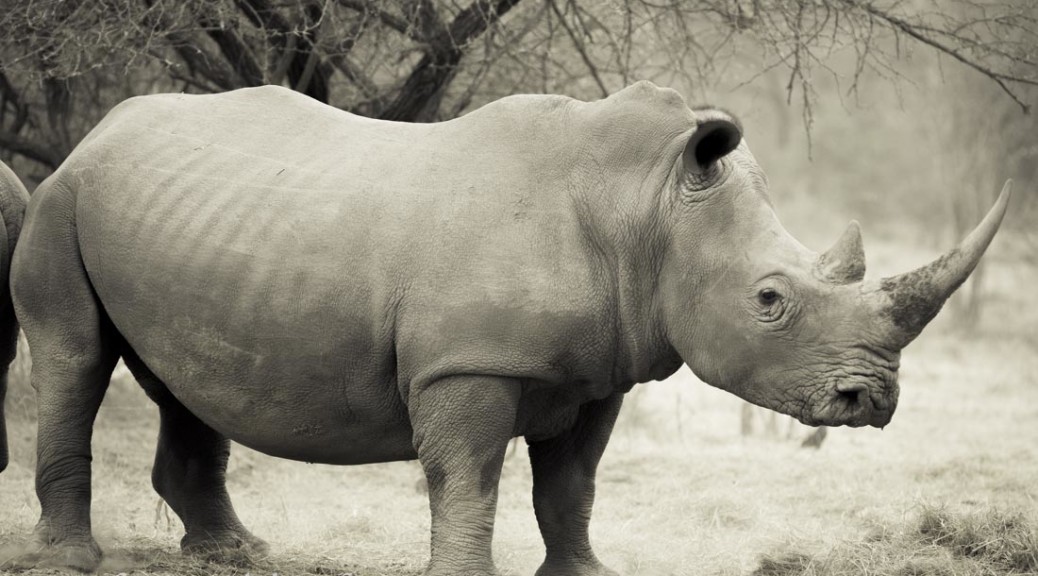 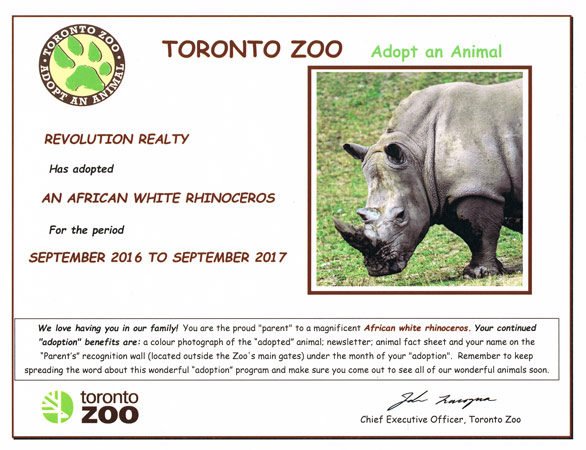 Philanthropy is an important part of the Revolution Realty culture. We believe in the importance of supporting our community, both locally and globally. To that end, each year since we launched we have adopted a white rhinoceros from the Toronto Zoo – we have even incorporated them into our logo! There are less than 12,000 of these animals left worldwide, and it is estimated that they will become extinct in the next 25 years. By adopting a white rhinoceros, we hope to promote the preservation of these creatures for future generations and to support the efforts of the Toronto Zoo in their protection of all wildlife populations and habitats.

The white rhino is the largest living land animal after the elephant. White rhinos are characterized by a massive body, a long head carried low to the ground and short thick legs which end on broad three-toed feet. The distinguishing feature of the white rhino is the huge muscular hump located behind its neck and its broad muzzle with squared upper lip. Colouration is a slate gray or yellowish-brown. The skin is almost naked except for the ear fringes, eyelashes and tail bristles. White rhinos possess two medial horns on the snout, one behind the other. The front horn averages about 60 cm in length but can reach more than 150 cm; the back horn is much shorter and more triangular. In spite of its rugged appearance, the skin is highly susceptible to injury and infection. The epidermis is relatively thin and the dermis is very thick, approximately 2 cm, depending on the area. The rhino has no front teeth (incisors); cheek teeth are high, broad and strongly serrated.

Reproduction & Development
Breeding occurs throughout the year. Before mating the bulls may fight over the females and courtship itself is often violent. After a gestation period of 16-18 months a single calf is born. The youngster weighs about 40-65 kg at birth and is on its feet a few hours after birth. The calf suckles for at least a year and stays with its mother for 2 or 3 years·, leaving only when the next calf is born. Females reach sexual maturity at 4- 6 years and males at 10 – 12 years. Longevity is approximately 40-50 years.

Adaptations
Vision is relatively poor, but senses of hearing and smell are acute. A strip of cartilage inside the broad lips enables it to pluck off grass only an inch or two tall. Activity generally is in the early morning, late afternoon, and evening. The rhino wallows or rests in the shade during the middle of the day. Wallowing in the mud is especially important during hot weather for purposes of thermoregulation and for ridding the body of ectoparasites. Rhinos have developed a special relationship with such birds as the oxpecker, egret and bee-eater referred to a commensalism (both organisms receive some benefit from the relationship.) These birds act as sentinels and feed on a wide variety of parasites on the backs of the rhinos.

Threats to survival: Man
Through destruction of habitat and hunting for horns, hide and flesh. Poachers kill for the removal of the horns, which is believed to contain a powerful aphrodisiac. (There is absolutely no scientific proof that rhino horn (or any horn of any animal) prevents disease or acts as an aphrodisiac. This stems from very old beliefs and practices. Unfortunately, rhinos are still being poached for their horns and their numbers continue to decline. At this rate, within the next 25 years, these magnificent animals that have been on earth for thousands of years will be gone.)

General
The name “white” rhino is thought to be derived from the Afrikaan word “widje” meaning wide, referring to the broad square lipped mouth that distinguishes it from the black rhino. The rhino’s horns are not attached to the skull and are made of keratin, the same material as human hair and nails. The horn is located above thick, rough areas of fused nasal bones and grows throughout the life of the rhino. They are usually prevented from growing too long by wear. If broken off regrowth begins immediately.

The white rhino has the most complex social structure among all the rhinoceroses. Temporary associations of up to 14 individuals have been observed. While females and young associate in groups, adult males are territorial and essentially solitary. Territorial bulls mark and patrol the boundaries of their areas and challenge any intruding adult male. Serious fights are rare and usually one or both of the opponents retreats. More intensive conflicts, with head-on charges and the infliction of injuries by horning or ramming may occur when males compete for estrous females. A dominant male usually tolerates the presence of several subordinate males within his territory and also allows females to wander freely through the area. The rhino’s range is generally restricted to an area where daily trips to water are possible.

The white rhino has about 10 vocalizations. They include a panting contact call, grunts and snorts associated with courtship, squeals of distress and deep bellows or growls when threatening. Dominant males spray urine to demarcate the boundaries of their territories. There are communal dung heaps, which facilitate olfactory identification between animals in an area. Territorial males have the habit of scattering their dung after defecation.

A high-stepping trot is normally the fastest gait, moving at a pace of 24km/hr, which a rhino can maintain for at least 5 km. White rhinos can gallop for short spurts at 40km/hr.


Help the Rhinos and donate directly to the Toronto Zoo by clicking their logo below: